Generation Z-ers, currently between the ages of 13-24 years old, are set to be the biggest and most influential consumer group. This generation represents diversity, creativity and a brand new perspective for brands, leaving marketers to wonder how they can reach this audience effectively. Thus, we conducted a 35 question survey among 2,500 Generation Z-ers in the U.S. to learn more about their snacking habits. 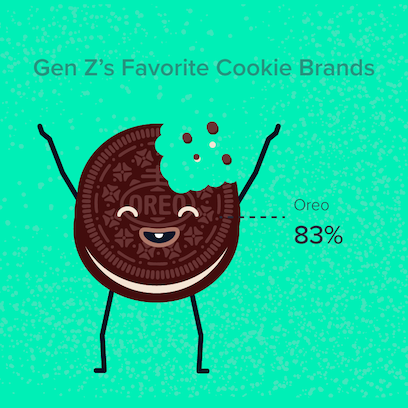 Below are some of the key insights we found regarding Gen Z snackers who prefer Oreos.

1. Oreos are most popular among males ages 16-18 years.
Within gender and the age groups of our survey (ages 13-24), we found that Oreo is most popular among 16-18-year-old males. 92% of males cookie snackers ages 16-18 include Oreo as one of their favorite brands. Oreo’s popularity begins to diminish among older female Gen Z-ers, with 75% of 22-24-year-old female cookie snackers selecting it as a preferred brand.

2. Compared to other major U.S. ethnic groups, Hispanic/Latino Gen Z-ers like Oreos the most, with 87% of Hispanics/Latinos who snack on cookies choosing Oreo as one of their favorite brands. Oreo also scored well among African Americans (86%) but lost ground among white respondents with 82% preferring the cookie brand.

Compared to the overall Generation Z population, Oreo snackers are more likely to snack more frequently, less likely to value health as a factor in snacking, and more likely to spend extensive screen time in front of the television and internet-connected devices.

So how did the Oreo brand manage to win the hearts (and stomachs) of engaged and frequently snacking Gen Z consumers? Oreo’s brand marketing has been consistently on point, with witty pop culture social media content, light-hearted ads, and a wide network of LTO partnerships with franchises such as McDonald’s, Starbucks, Baskin Robbins, etc. Keeping in mind its exceptionally strong brand awareness and high level of engagement among Gen Z consumers, brands would be smart to learn from Oreo.